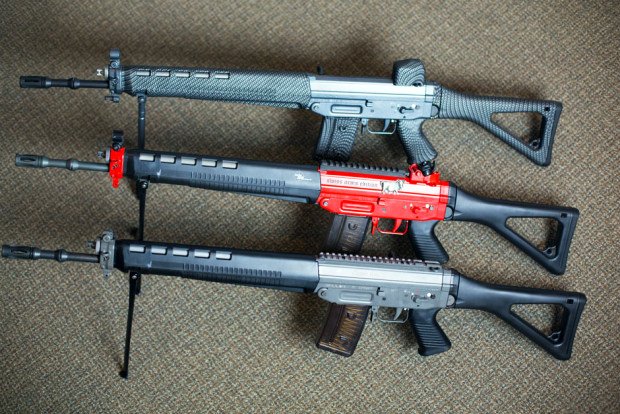 Just before the election was called last weekend, the Harper government reversed the RCMP’s ban on certain Czech- and Swiss-made rifles — the first time the government had exercised new powers allowing it to override the police force’s gun-classification decisions.

The Mounties did not respond to a request for comment Thursday, but over the last several days Canadian gun owners have rejoiced on social media after Steven Blaney, the public safety minister, announced that CZ-858 rifles and the Swiss Arms family of rifles were no longer prohibited.

“About damn time, Swiss Arms out in the bush for the weekend!!!” the operators of the Gun Owners of Canada web forum tweeted.

On the Canadian Gun Nutz web forum, owners of the affected Czech and Swiss rifles were encouraged to “dust off” their “newly freed” rifles and post pictures of them. Many did and also posted videos from the gun range.

“We’re very, very pleased. It takes firearms and puts them back where they belong,” said Tony Bernardo, executive director of the Canadian Shooting Sports Association.

Bernardo dismissed the suggestion that Blaney’s announcement was timed to coincide with the start of election campaigning.

But political observers say the Conservatives have likely identified gun owners as forming part of their traditional support base and are doing what they can to keep them happy.

“There’s always a political calculation, especially ahead of an election. Of course it’s going to be political,” said David Moscrop, a UBC PhD candidate in political science at UBC.

“This is classic dog-whistle politics — it resonates with certain groups of voters.”

With the election being as close as it is, the Conservatives are likely trying to send a message that they recognize gun owners “can make your own decisions (over) these interventionists,” Moscrop said.

“The margin is so close — if you can swing an extra 1 to 2 per cent to the polls, it can win you the race.”

The controversy started in February 2014 after the RCMP changed the status of Swiss Arms rifles and CZ-858 rifles from restricted or non-restricted status to prohibited. The guns had been legal in Canada for years.

RCMP members at the Canadian Firearms Program determined the guns too closely resembled or were “variants” of prohibited, automatic firearms.

It was believed that thousands of gun owners were affected by the ban and they were furious.

“The fact of the matter is, the RCMP was trying to hang this on the tiniest technicality of law,” Bernardo said. They may look like military guns, but they’re just “a modern sporting rifle. … They’re a hoot.”

In an effort to quell the backlash, Blaney admonished the “unelected bureaucrats” who ordered the reclassifications and swiftly introduced a two-year amnesty that would shield owners of those rifles from criminal prosecution for possessing them.

The fact of the matter is, the RCMP was trying to hang this on the tiniest technicality of law

Under the new law, the cabinet has the authority to remove restrictions on guns after getting “independent expert advice.”

“Following the February 2014 reclassification of the CZ 858 rifles and Swiss Arms family of firearms, our Government committed to take action to ensure that the property rights of affected individuals were restored,” Blaney said in his announcement last week. “These changes honour that commitment, our government will always stand up for law-abiding hunters, farmers and sport shooters.“

A couple of months ago, Blaney also asked the RCMP to review its prohibition of the Mossberg Blaze-47 rifle after gun enthusiasts raised a fuss about that classification.

The full article is available at the National Post