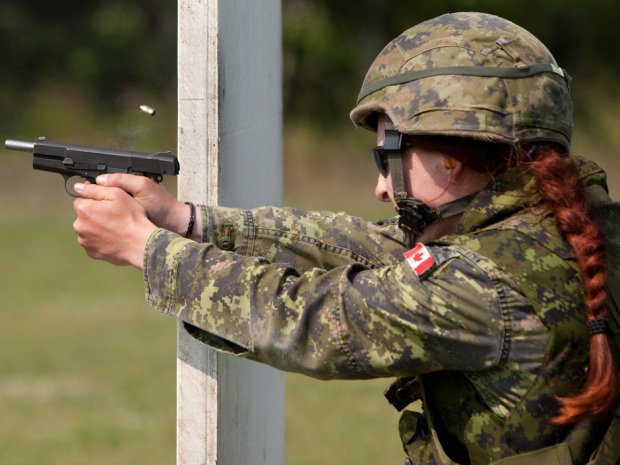 In keeping with a longstanding tradition of Canadians being unusually good at shooting things, a Victoria reservist has claimed the title as one of the world’s top military shooters.

Sgt. Tatyana Danylyshyn outshot several hundred competitors to top her class at the Bisley shooting competition, an annual event in the U.K. that has been dubbed the “Olympics” of military rifle shooting.

As a Canadian Forces press release noted, “her top shot placing was in the service rifle category of the Army Reserve Operational Shooting Concentration.” While other soldiers may be better with a pistol or a sniper rifle, Danylyshyn, 29, effectively ranks among Canada’s best reservists at wielding a military assault rifle.

“It seems to be going well,” said Danylyshyn, 29, a member of the Canadian Scottish Regiment and a veteran of the War in Afghanistan.

The month before the U.K. shoot, she also scored high at a shooting competition in Arkansas where she faced soldiers from the United States, the United Kingdom, Italy and Germany.

Although Danylyshyn is among a core of Canadian Forces shooters who dominate at competition, the reservist is consistently one of the few women—and certainly the only one to sport a brilliant red ponytail under her combat helmet. However, there is a persistent belief among shooting circles that women are inherently better with guns than men.

Danylyshyn says she’s not convinced women have any inherent physical advantages, but she noted that the small number of female soldiers she’s instructed on the range are “easier to coach.”

“I find that women shooters in general … are a lot more willing to adapt and try new things,” she said, adding that they’re less inclined to show up to the range with “preconceived notions” about shooting.

Cpl Simon DuchesneMaster Bombardier Jennifer Mason (right) and Corporal Tatyana Danylyshyn (second from left) of the Kandahar Provincial Reconstruction Team (KPRT) speak to an Afghan woman with the help of an Afghan interpreter (left) during a foot patrol in Panjwayi district, Afghanistan in April 2008.

“I taught all my kids to shoot before they started school, and to swim and to read as well,” said her father David Danylyshyn.

Nevertheless, after joining the reserves at 16, Danylyshyn said that during her first encounter with a military gun range she couldn’t even hit the target. Having broken her glasses, the nearsighted recruit was forced to aim into the “gray fuzz” downrange and hope for the best.

“They kept having me shoot and reshoot going ‘what’s wrong with you?’” she said. “I didn’t start off as a rock star or God’s gift to anything.”

There are actually very few ”Robin Hood moments” in the career of an elite military shooter. On occasion, Danylyshyn has managed to put several bullets through the same hole in a target, but she says those instances are merely “luck.”

CANADIAN FORCESTatyana Danylyshyn, second from left, with Canadian teammates at the annual Bisley shooting competition. This event took place at the Primary Training Centre Pirbright in Bisley, United Kingdom, from June 21 to July 1, 2015.

The mechanical limits of the rifle means that—beyond 25 metres—even the most accurate shots won’t land in exactly the same place without some coincidence playing a part.

As a soldier, Danylyshyn shoots in competitions that are essentially stock car racing for rifles. Unlike Olympic shooting, where competitors show up with rifles specifically made for precision, Danylyshyn and others are using the rifles and scopes that they would take to the battlefield.

In the case of the Canadian Army, soldiers come packing a C7. Built by Colt, the assault rifle is similar to the U.S. M-16 and the civilian AR-15—albeit with a stronger and more accurate barrel.

Despite its relatively small army, Canada has a recognized penchant to turn out uncannily good shooters.

One of history’s deadliest snipers is Francis Pegahmagabow, an Ontario Ojibwa who killed 378 Germans during the First World War.

During the war in Afghanistan, two successive Canadians broke the world record for longest recorded sniper kill. In March, 2002 Arron Perry hit a Taliban fighter from a distance of 2,310 metres. Only a few days later, Rob Furlong bested the record with a hit at 2,430 metres.

Canada has long had the benefit of recruiting its soldiers from a populace that is relatively accustomed to shooting moose, geese and the like. And according to Danylyshyn, it has bred a strong culture of marksmanship in the Canadian Forces.

“You get very competent, experienced people in the military shooting program,” she said.

Danylyshyn is a hunter, but she says that her marksmanship doesn’t necessarily translate into hunting prowess, mostly because she’s “much more conservative” about making a shot when the target is an animal.

“If you screw it up—and there’s always those moments—you want to make sure it’s not at some animal’s expense,” she said.

Ryan Jackson / Edmonton JournalTatyana Danylyshyn, 25, looks back at one of her targets during training and selection camp for the Land Force Western Area’s combat shooting team at CFB Wainwright in Wainwright, Alta. on August 19, 2010.

– The following article is from National Post. Full Article

CANADIAN FIREARMS DIGEST IS BACK IN BUSINESS