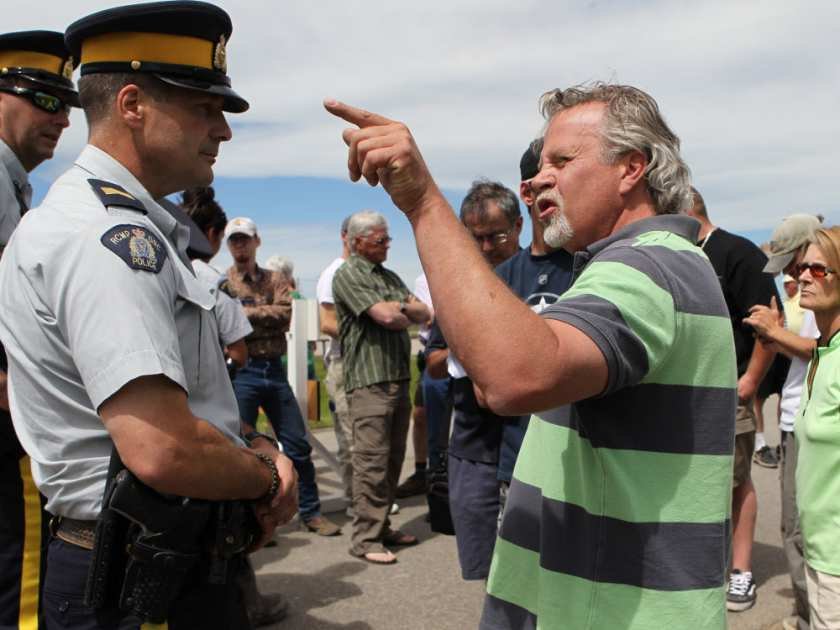 Senior politicians stated (hoped) that the High River report released on February 12, 2015 by the RCMP Public Complaints Commission would close the file on the hundreds of doors being kicked in, 4,666 x 2 unwarranted entries and searches, seizures of hundreds of guns, and seizure and destruction of tons of ammunition, seizure of firearms magazines, bows, knives, etc, etc. The 122-page report didn’t even come close to answering all the questions that High River residents asked at their town hall meeting on September 5, 2013.

PROMISE: Alberta Justice Minister and Solicitor General Jonathan Denis’ letter dated January 28, 2015 stated: “The Province of Alberta, as a contracting partner for the services of the RCMP, have worked with the CRCC (Civilian Review and Complaints Commission for the RCMP), as the federally legislated oversight body, to ensure sufficient accountability to Alberta and its citizens results from this independent review.”

PROMISE: Defence Minister Rob Nicholson’s letter dated January 5, 2015stated: “I am confident that the Commission will look into many of the questions you raise in your letter and that have been expressed by other members of the public and I look forward to the results of the investigation.”

PROMISE: On September 6, 2013, Peter MacKay, Justice Minister and Attorney General for Canada responded to a constituent’s concerns (PDF page 000158): “I am honoured to assume the responsibilities of this position and I intend to work with great commitment to maintain and enhance the integrity and professionalism of Canada’s system of justice. As you are aware, the RCMP falls under the purview of my colleague the Honourable Steven Blaney, Minister of Public Safety and Emergency Preparedness. I note that you also addressed your correspondence to Minister Blaney’s predecessor. While I appreciate being made aware of your concerns, I will leave this matter to be considered by Minister Blaney. The oversight of policing services in Alberta is the responsibility of the Honourable Jonathan Denis, Minister of Justice and Solicitor General of Alberta. Therefore, if you have not already done so, you may wish to share your concerns with Minister Denis.”

Comment: The RCMP Complaints Commission High River report did nothing to “enhance the integrity and professionalism of Canada’s justice system” as promised by Justice Minister MacKay.

PROMISE: In response to dozens of letters of complaint and concern to Prime Minister Harper, many requesting a judicial enquiry into the RCMP actions in High River, the Prime Minister’s Office responded: “You may be assured that your comments have been carefully reviewed. A copy of your correspondence has been forwarded to the Honourable Steven Blaney, Minister of Public Safety and Emergency Preparedness. I am certain that the Minister will appreciate being made aware of your views and will want to give them every consideration.”

Comment: The RCMP Complaints Commission High River report did not give the “views” of these many constituents “every consideration.” Now it is up to the Prime Minister and the Public Safety Minister to demand an inquiry that will address all the outstanding issues and rebuild the trust of High River residents. RCMP draft emergency/evacuation policies seem to be written to justify a repeat of what happened in High River in 2013. Let’s hope the final version makes the necessary corrections to protect the Charter rights of evacuated residents during the next emergency/evacuation.

PROMISE: Steven Blaney, Minister of Public Safety and Emergency Preparedness responded stating (PDF page 000119): “Please rest assured that the Government of Canada will continue to do everything it can to assist Albertans deal with this tragedy.”

Comment: The High River report prepared by the RCMP Public Complaints Commission does not give these constituent’s concerns “every consideration and does not begin to “do everything it can to assist Albertans to deal with this tragedy”.

So many ministers responsible for the RCMP and no one being held accountable for what the RCMP did to the 4,666 High River homes and their owners’ private property. Two telephone polls conducted in High River demonstrate the inadequacy of the RCMP Complaints Commission’s High River report: A telephone poll taken after the Commission’s report was released, showed that sixty-seven percent of the people in High River thought the RCMP’s actions were not “appropriate”. Trust in the RCMP is so bad in High River that fifty-three percent of residents polled last August indicated they would be prepared to refuse an evacuation orderin the event of another emergency/evacuation.

If trust is to be rebuilt among the residents of High River a more thorough investigation has to be conducted, one that will answer all the questions that still remain outstanding, then the persons responsible must be held accountable for what the RCMP were allowed to do in High River and legislation drafted, passed and enacted to make sure it never happens again anywhere in Canada.

HERE ARE JUST A FEW QUESTIONS THAT REMAIN UNANSWERED TODAY:

This commentary has described more very important reasons why there needs to be a full judicial inquiry into the RCMP’s actions and the Alberta Government’s support for and defence of those actions. For more reasons open the links below.

FIREARMS LICENSE HOLDERS HALF AS LIKELY TO COMMIT A HOMICIDE By Dr. Caillin Langmann, M.D. Ph.D.