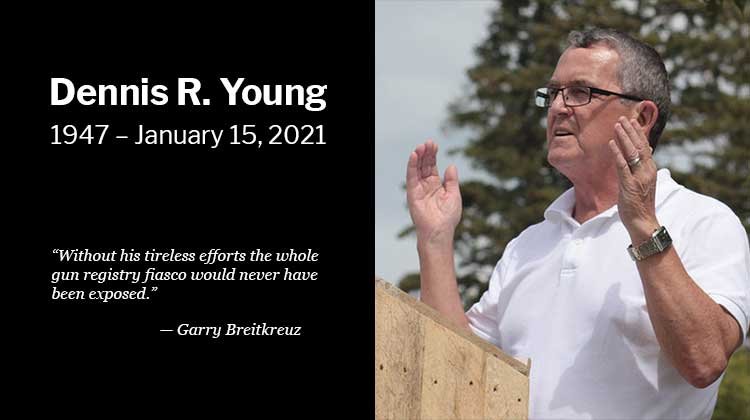 Dennis R. Young, Canada’s foremost firearms researcher, passed into glory on the evening of January 15, 2021, after a second lengthy battle with cancer.

Dennis is survived by his wife Hazel, their children Jennifer and Steven, and their three grandchildren, and his brothers Kim Young and Gordon Young, sisters Ardyth Tait and Merle Lynn Watson.

Dennis is perhaps best known for his devotion and dedication to his wife Hazel, who was diagnosed with primary progressive multiple sclerosis in 1985.

“Dennis’s faithfulness to his wife was a shining example to all of us in our marriages,” said Garry Breitkreuz, former Conservative MP for Yorkton—Melville. “Lydia and I would go over to his home for dinner once in a while and we’d see his dedication to Hazel. His love for her was awesome to witness.”

A Tireless Advocate for Gun Owners

“Dennis worked tirelessly behind the scenes to uncover all the facts the government tried its hardest to keep hidden from the public. Without his efforts, the whole gun registry fiasco would never have been exposed,” said Garry Breitkreuz.

“He was very loyal and absolutely fantastic to work with.”

“I think we might still have a long-gun registry if it hadn’t been for the work that Dennis Young did over all those years in Ottawa,” Jason Kenney said at an Alberta town hall meeting on October 10, 2017.

After retiring in 2007, Dennis Young continued his work as an independent researcher on firearms-related issues and published the results of all his Access to Information efforts on his website, DennisRYoung.ca.

“Canada’s firearms community is greatly diminished by the passing of Dennis Young,” said Tony Bernardo, Executive Director of the CSSA.

“Over the last 25 years, I have been proud to count Dennis as a comrade-in-arms and as a trusted friend. His tireless commitment to truth and honesty was a signpost that always pointed to the high road.”

“The CSSA is in mourning.  Dennis Young will not be forgotten,” Bernardo said.

“Dennis Young was a life member of Canada’s National Firearms Association and the Canadian Shooting Sports Association,” said NFA president Sheldon Clare. “He was granted those honours because he worked hard for decades to fight for the rights of Canadian firearms owners, and thus benefitted the public at large.”

“Dennis was a great researcher – bureaucrats trembled at the volume and quality of his access to information requests over matters affecting firearm rights, and over the infamous High River gun grab. His humble yet vigorous efforts, without compensation or favour, were inspiring.”

“As a former Mountie, Dennis had tremendous respect for the law but hated to see process abused. After he left parliamentary service, Dennis continued to research and find information benefitting firearm rights, all while supporting his beloved wife Hazel in her struggle with MS.”

“I am pleased that we were able to host Dennis on a recent NFATalk programme and thank him directly for all of his service on our community’s behalf.”

There will be a private family service held for Dennis Young in Calgary. The family requests their privacy be respected so they can mourn the loss of their loved one.

Thank you for your time and education, I miss you Mr. Young.

Lord Have Mercy.
REST IN PEACE sir, you were a great Canadian, and a man of honour.

Dennis is a household name and legend in Canada’s firearms community because of his relentless search for truth and transparency. I know there is immense sorrow and reflection as the news makes it’s way through the larger community of firearms owners. He has left a legacy of deep gratitude and fortitude in many that were strangers.
Thank you to his family for lending us his time and energy over the years and condolences on your personal loss.

I never had the honor of meeting Dennis, although with his help, Garry Breitkreuz was able to attend a firearms public forum with MP John Reynolds and our gun club in Powell River BC, around 2001. As current club president, I had the fortune to spend time with Garry and his wife. Even there, Garry was full of praise for Dennis, and his work ethic. When Dennis began the ATIP program, I knew we had a extremely competent and tireless researcher on our side.His passing will sadden all of us who knew, or knew of him, and of his work… Read more »

Dennis was a close friend and confidant. The true kind. His legacy will live on in Christopher and all his supporters. Sincere condolences to his beautiful wife Hazel and his family.

Sad and devastating loss for the people of Canada, civil rights, and his family. Without his tireless efforts and research into the “Gun Grab” by the RCMP in High River, the victimization would never have come to light.

Condolences to family, friends, and all of us.