Firearms and Freedom-Related News for the week ending August 27, 2022 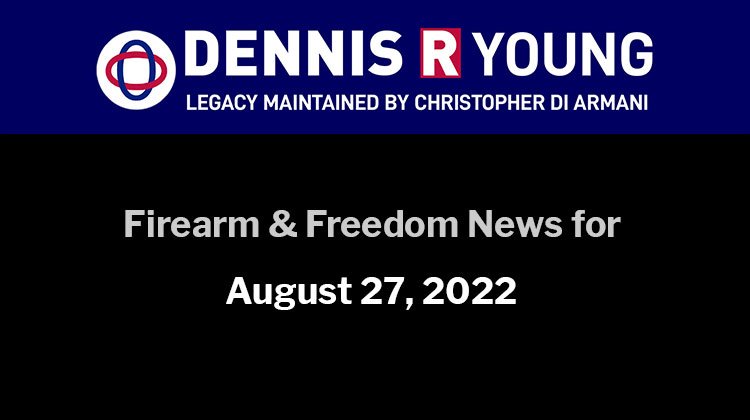 “2021 was a record year for illegal firearms seizures but there is still a lot more work to do,” Mendicino told reporters. “I think it’s really important that Canadians know the federal government does see as a priority the need to stop illegal trafficking of guns at our borders,” he added.

The Border Services Agency in a Year In Review report last December 10 said officers seized 908 firearms including 316 handguns. Mendicino’s department in a November 10 briefing note said it had no idea how many firearms were smuggled into Canada.

Mendicino yesterday did not comment on the scope of smuggling. “We can’t tolerate the status quo,” he said.

“Handguns are the number one type of guns used in homicide,” said Mendicino. “It’s a type of gun that has been growing on average between 45,000 and 55,000 new registrations each and every year and we want to stop that trend. We hope by doing so we will bring down handgun violence.”

The deputy commissioner of the RCMP says its use of spyware is necessary when other investigative means run their course but concedes there are “legislative gaps” in governing when such technology is used.

The recent revelation that the Mounties are using spyware sparked an investigation by the House of Commons ethics and privacy committee earlier this month, amid concerns about the risk of invading Canadians’ privacy.

“We want to mitigate those risks,” Bryan Larkin told Power & Politics host Vassy Kapelos on Thursday. “We want to ensure that we create solid criminal investigations that meet the rigour of our judicial system.”

The Mounties’ use of what they call “on-device investigation tools” involves remotely accessing cellphone and computer microphones, cameras and data.

The agency initially said the technology was used 10 times between 2018 and 2022. RCMP Commissioner Brenda Lucki later said it was used in 32 investigations to target 49 devices since 2017.

Larkin said the force is trying to find “that true balance of the privacy of Canadians and ensuring that we keep our country safe and resilient.”

During his testimony before the committee, Daniel Therrien, who was the country’s privacy commissioner until recently, said he was never informed about the RCMP’s use of spyware.

“It was surprising that in the context of many, many debates in the public about the challenges of encryption, that when I was privacy commissioner, I was not told that a tool was used to overcome encryption,” he said.

Larkin said the spyware is a key part of the RCMP’s toolkit, especially when traditional avenues of investigation such as interrogation and physical surveillance are exhausted.

“But it’s got a significantly high threshold” for usage, he said, such as in national security investigations, homicides and significant drug trafficking or importation.

The process of obtaining the necessary legal authorization for its use is not speedy, he added.

“This isn’t a one-week process.”

While Larkin confirmed the force will co-operate with the federal privacy commissioner in finalizing an assessment process for the technology, he said there is still a lot of work to be done on enhancing transparency and trust from Canadians.

“We understand Canadians’ concerns,” he said. “This is a new emerging technology … We want to ensure that we create solid criminal investigations that meet the rigour of our judicial system.”

Digital ID in Canada. Is the US Next?

The World Economic Forum (WEF) is actively promoting digital IDs. The Known Traveler Digital Identity (KTDI) is a WEF initiative that, according to its website, “brings together a global consortium of individuals, governments, authorities and the travel industry to enhance security in world travel.”

As you can probably tell by the name of the initiative, digital IDs are a core component of the WEF’s desire to “enhance security.” Canada is KTDI’s most prominent member. Now, Canada, supposedly a country interested in advancing human rights, wants to introduce a federal “Digital Identity Program.”

According to a recent report released by the Canadian government, those in charge want “to make it easier for Canadians to interact with the Government of Canada.” For this to occur, though, “modern, integrated systems and an unwavering focus on the needs and experience of citizens” are required. In plain human language: this will require the introduction of digital IDs.