Firearms and Freedom-Related News for the week ending August 20, 2022 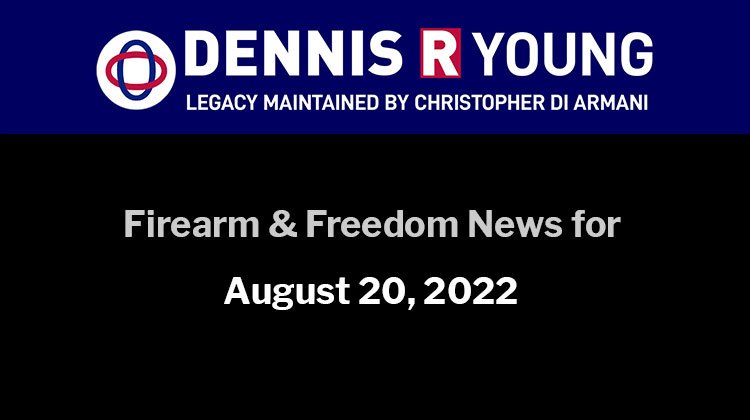 I’m going to throw a lot of statistics at you in this column, but my purpose is simple: To show that Canada does not have a gun crime problem, at least not one that would warrant the kind of draconian gun controls the Trudeau government has brought in during the past two years, and is still bringing in.

On Aug. 19, the Liberals will ban the legal import of handguns into Canada. Since handgun ownership in Canada has been closely regulated since 1934 (88 years) and since nearly all handguns used in crimes in Canada are illegal ones smuggled in from the States, the Trudeau ban will have exactly zero impact on gun crime in Canada.

The sole effect will be to punish legitimate gun owners so the Liberals can tell their urban supporters that the government is being tough on crime, even though the crime they are being tough on is relatively rare in Canada, but which nonetheless frightens Liberal voters, especially in Toronto, Montreal, Ottawa and Vancouver.

So determined are the Liberals to score points by demonizing legitimate gun owners immediately, the Trudeau government is banning handgun imports using a law that was mostly designed to prevent foreign dairy producers from flooding our domestic markets with cheap cheese.

While a judge would almost certainly overturn this Liberal legal fraud, by the time the case could get to court, the Liberals (and NDP and Bloc) will have passed a full handgun ban making the fraudulence of their current move moot.

All of the Liberals’ maneuvers – the handgun ban, the assault weapons ban in 2020, even the gun registry in the 1990s – have been predicated on the assertion from the Liberals and gun-control zealots that firearms crime in Canada is bad, getting worse, and in danger of being out of control.

This perception is fed by biased media coverage that lacks all perspective, too.

The top Canadian city on the list of the world’s most murderous cities was Thunder Bay with 6.35 murders per 100,000 (by all types of weapons). That might sound like a lot, but Thunder Bay’s murder rate would make the northern Ontario city just 59th-worst in the U.S.

We sometimes hear scary phrases and headlines, such as “Summer of the Gun” and “raging gun violence.” Yet homicide rates (all weapons) in Canada’s 10 largest cities wouldn’t even get one of them into the top 100 in the US.

Calgary police say gun violence is increasing across the city, but the majority of it isn’t tied to organized crime.

“Regardless of motivation, offenders involved in this type of crime have shown very little regard for the safety of Calgarians, with several recent incidents occurring in busy public areas,” said Insp. Jodi Gach.

Police have recently laid more than 120 charges and seized 10 firearms as they address the rise in gun violence in the city this year.

The charges were laid against nine people, all previously known to the Calgary Police Service’s organized crime unit, Gach said.

“Organized crime and gang-related violence is not increasing this year,” said Gach. “We know that the number of shootings has increased, but it’s increased overall in the city.”

More than 75 per cent of shootings investigated this year include other motivations such as personal conflict, road rage, accidental discharge and non-gang-related drug shootings.

“People who historically wouldn’t have been using guns have elevated their level of violence,” said Gach.

The rising availability of guns and the reckless behaviour of organized crime is a large part of the problem, she said.

A handful of the charges announced Wednesday are being investigated in connection with a brazen public shooting in Saddle Ridge in early April when 10 homes and three vehicles were hit with bullets.