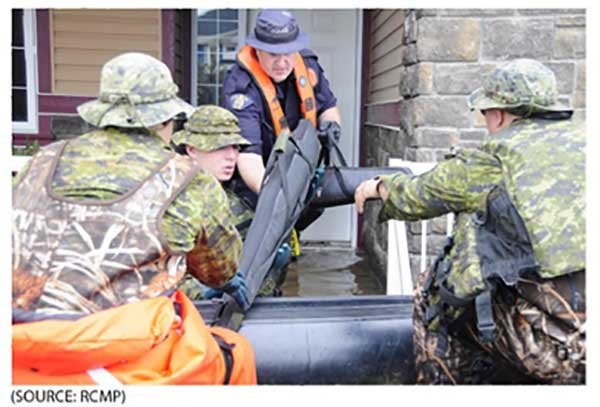 APRIL 1, 2014 – CANADA FREE PRESS – PRAY THE RCMP DON’T LOOK AFTER YOUR TOWN IN A STATE OF EMERGENCY – EXCERPT: Having secured their home again, Don White went to the RCMP detachment in High River to pick up his long guns, where the RCMP officer informed him that that two of his long-guns weren’t registered.  Don responded, “That’s right, the two new shotguns we just bought!”  The only possible way the RCMP Constable knew that two of his long-guns weren’t registered is if he had access to a copy of the old long-gun registry listing of their guns – a listing that was supposed to be completely destroyed in accordance with an Act of Parliament, Bill C-19, Ending of the Long-gun Registry Act, proclaimed into law on April 12, 2012. By Dennis R. Young – April 1, 2014 https://canadafreepress.com/article/pray-the-rcmp-dont-look-after-your-town-in-a-state-of-emergency

We are heading into a police state society and the only way to stop it, is NOW. Us Canadians have the right to be free from getting oppressed by police. Our rights are being takin away, little by little. Has the PM or your premier done anything? It does sound fishy to me, how the rcmp received the information. It also seems that Quebec has been playing the LIAR from listening to the Government, on getting rid of the Order of the registry.

Well I for one am sick and tired of playing nice
Every time these guys try something/anything here there will be a huge legal backlash
NO MORE putting up with this BS.
I will not change my lifestyle to make it life “easier” for a bunch that I PAY with my tax dollars to WORK FOR ME
Public servant means just that. You are MY SERVANT. Does that hurt? QUIT

HOWEVER THIS UNIT HAS NO ESTABLISHED PUBLIC SAFETY CRITERIA FOR THEIR SEARCHES
https://dennisryoung.ca/2017/01/27/report-rcmp-firearms-internet-investigative-support-unit-has-no-established-public-safety-criteria/

I bet the rcmp are monitoring all these sights and noting all comments. I’ll keep quiet as I have nothing positive to contribute with reference to our vaunted Mounties.