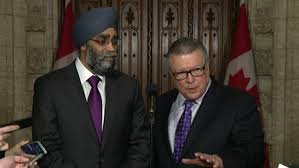 REPLY: On July 5, 2013, the Chair of the Commission for Public Complaints against the RCMP, now the Civilian Review and Complaints Commission for the RCMP (CRCC), initiated a public interest investigation into the conduct of members of the RCMP during the evacuation of High River, Alberta. The CRCC’s interim report was released on February 12, 2015, and its final report, which included 52 findings and 10 recommendations, was released on April 29, 2016.

The Government does not intend to hold a judicial inquiry into this matter.