Firearms and Freedom-Related News for the week ending August 13, 2022 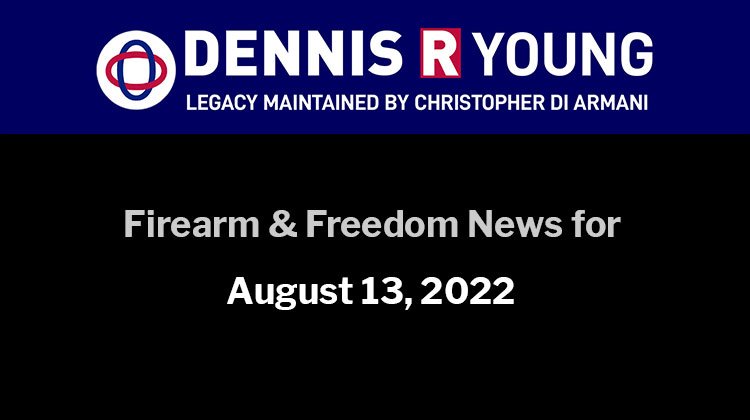 Quebec police say the gun used to kill three people in the Montreal area this week was acquired illegally.

Provincial police spokeswoman Genevieve Gagnon says 26-year-old Abdulla Shaikh, who is suspected of killing the three men at random, did not have a firearms license.

But she says police still don’t know how he obtained a gun.

Shaikh was killed by Montreal police Thursday morning, he is suspected of killing three men within a period of about 24 hours.

Quebec’s mental health review board ruled in March that Shaikh, who was under the supervision of a mental health hospital after being found not criminally responsible in a November 2018 mischief case, posed a “significant risk” to public safety, but allowed him to continue living in the community.

One person dead after shooting at funeral for Toronto homicide victim

A man is dead and another is in serious condition after a shooting at a Richmond Hill cemetery, where they were attending a funeral on Thursday for a man who was shot and killed in Toronto earlier this week.

Officers responded to a weapons call at Toronto Muslim Cemetery on Leslie Street shortly after 3:30 p.m.

“We received information that there was an active shooter and that we had a victim of a gunshot wound,” Const. Maniva Armstrong said.

When police arrived, they located a 26-year-old man and a 27-year-old man suffering from multiple gunshot wounds, including one who was found inside a car at the cemetery’s gate.

The two were rushed to hospital with life-threatening injuries. Police said the 26-year-old later died in hospital.

Armstrong said the victims were approached by three to four male suspects who then opened fire at them.

The suspects then got into an older model SUV and were last seen northbound on Leslie Street. Police have not released descriptions of the suspects.

An Edmonton Police Service officer has been acquitted of assaulting his fiancée but convicted of improperly storing a police-issue firearm in his home.

Provincial court Judge Peter Ayotte on Friday fined Const. Hunter Robinz $1,000 for the firearms offence, finding he kept an EPS carbine in his bedroom closet beside two clips of live ammunition, despite being on desk duty and having no authorization to keep the high-powered firearm.

Parkland County RCMP seized the weapon after Robinz’s then-fiancée, M.M., reported him for assault. The woman, who Postmedia is identifying by her initials, claimed Robinz grabbed her by the throat during an argument. Robinz, on the other hand, claimed M.M. started the fight.

Ayotte had trouble believing both M.M. and Robinz, forcing him to acquit.

“Despite my suspicions, given the frailties in both of their evidence, I am left with a reasonable doubt,” Ayotte wrote. “The law requires that I give (the accused) the benefit of that doubt. I do so and find him not guilty of assault.

At the time of his arrest, he was confined to desk duty pending an internal investigation in another case and had been ordered to clean out his locker and surrender his service pistol.

Nevertheless, Robinz had taken home a police-issue C8 carbine, which police later found in his closet.