Firearms and Freedom-Related News for the week ending July 30, 2022 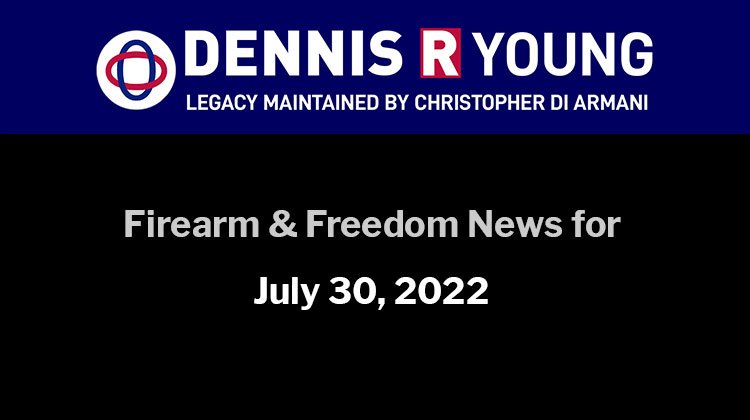 Judge rules Tamara Lich can be released on bail

Following an allegation that she breached the conditions of her bail, Tamara Lich, one of the organizers behind the Freedom Convoy, has been granted her release after a bail review. Lich has been behind bars since she was arrested in Medicine Hat, Alberta after Ottawa police asserted she had broken one of the terms of her bail.

The allegation stemmed from a picture Lich took alongside Tom Marazzo, another organizer behind the Freedom Convoy, at an event hosted by the Justice Centre for Constitutional Freedom. Part of the conditions placed on Lich required her to avoid contact with other organizers unless she was accompanied by her legal representation. Lawyers from the Justice Centre, who were at the event, are representing Lich.

Upon her arrest in Alberta, Lich was transferred back to Ottawa for a review of her bail. Since being detained for a second time, Lich has racked up 48 days in custody on charges stemming from the Freedom Convoy.

Since 2020, the Government of Canada has banned more than 1,500 models and variants of assault-style firearms. The Government will launch a buyback program to ensure these weapons are safely and permanently removed from our communities, and to provide compensation to owners and businesses impacted by the May 1, 2020 prohibition.

The proposed price list for individual firearm owners is based on market price. The compensation amounts will be finalized in the coming months.

The banned firearms represent more than 1,500 firearm models and variants that have been categorized into 11 firearm categories. Detailed proposed compensation amounts are provided below.

The proposed price list for individual firearm owners focused on developing a list of prices that reflect what the average Canadian may have paid for an assault-style firearm, identified in the 11 categories above, prior to May 1, 2020. The price list was developed by using data sources that include: manufacturer prices, Canadian retailer prices, foreign retailer prices (e.g. USA/EU), pricing guidebooks and auction listings. Wherever possible, manufacturer prices and Canadian retail prices were given priority.

To send the government your thoughts on their Firearms Confiscation Compensation scheme, click this link:

Jordan Peterson: Worst is yet to come from Trudeau Liberals

I have had the great privilege of travelling to 40 American cities in just about as many states and to 15 European countries in the last four months, in the waning days of the great COVID panic, and I have learned many things about our great and self-conscious nation.

First: I have not travelled anywhere else where the citizens and the government are more neurotically “concerned” about the pandemic. It may have escaped Canadians’ notice, but virtually nowhere else in the developed world is it now required to wear a mask, as is still mandatory in many of Canada’s airports and on flights out of our benighted country.

There is absolutely no excuse for this, except the punitive self-righteousness of the Trudeau Liberals. What else might you expect, however, from a government that also includes Chrystia Freeland, a deputy prime minister who has bragged about her colleagues’ appalling economic performance, claiming that it is actually good for Canadians to empty their wallets at the gas pumps, because of its implications in fighting the “climate emergency.”

I simply cannot believe that this absolute failure of economic policy is now being trumpeted as a positive accomplishment. Here’s a hint for you saintly progressives: if you cared about the poor (the real poor, not the hypothetical poor you are hypothetically saving in the future), you would seek to drive down the cost of energy — energy that is precisely equivalent to work and, therefore, to the wealth that ameliorates poverty.

Second: it is almost impossible to overstate the degree to which Canada’s international reputation has been damaged by Prime Minister Justin Trudeau.