Firearms and Freedom-Related News for the week ending July 23, 2022 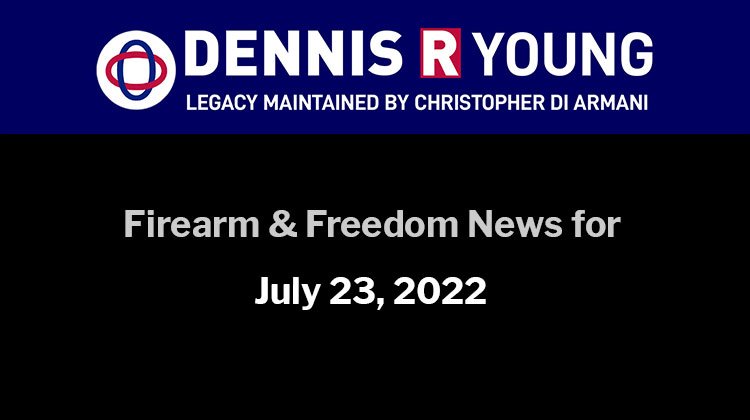 The Liberal government wants to hire licensed firearm businesses to come to your home, destroy your firearm in front of your eyes, then transport your ruined property to a destruction facility.

All before you are paid a dime.

This news came out in a July 14, 2022, Public Safety Canada Request for Information (RFI) to see if anyone is willing to be the Liberal government’s scapegoat for door-to-door pick-up and destruction of “newly prohibited firearms (NPFs)”.

What is clear from this RFI is the Government of Canada has no intention (at this point) of using law-enforcement or military personnel or resources for the collection of “newly prohibited firearms (NPFs)” under the May 1, 2020 gun ban by Order in Council.

They want civilian companies to take on the confiscation and destruction of your private property while you wait for a cheque from the Feds for your already-destroyed property.

“The listed firearms prescribed for prohibition represent 80% of registered rifles in Canada, the majority of which are located in British Columbia, Alberta, and Ontario.”

The RFI specifically seeks businesses with “licensing, training and experience in safely collecting, handling, transporting and storing firearms in Canada” and requires confirmation of the business’s “ability to render firearms inoperable at first point of contact.”

Is it worth being the government’s scapegoat for seizing and destroying the private, lawfully purchased property of Canadian firearm owners?

That depends on your perspective and the quality of your character.

There are always greedy Quislings who will happily dip their hands into the government trough while telling themselves that “Someone’s gonna get the thirty pieces of silver. Might as well be me.”

This program will be no different, with one important exception.

Justin Trudeau’s Liberal Government will, with a straight face and all the faux sincerity they can muster, legitimately claim they did not destroy anyone’s private property.

This Liberal government will happily out their “partners” (aka scapegoats) as evidence the Liberal Government didn’t confiscate or destroy anyone’s guns.

Will once-trusted businesses in our community fall for this Liberal bait-and-switch?

Alberta’s Court of Appeals has ruled in favour of Pastor Artur Pawlowski who was arrested, jailed and fined for preaching during Alberta’s Covid-19 lockdowns.

Pastor Artur Pawlowski, of the Cave of Adullam congregation in Calgary, became a prominent figure following an April 2021 Easter service, in which he threw armed police out of his church when they attempted to inspect it for Covid-19 compliance. He was arrested multiple times and held at Edmonton Remand Centre, Canada’s largest prison.

Now, the Alberta Court of Appeal ruled that the injunction against him, his arrest, his jail time, the censorship order and fines against him were illegal.

Justice Barbara Lea Veldhuis, Justice Michelle Crighton and Justice Jo’ Anne Strekaf ordered Alberta Health Services (AHS) to reimburse Pawlowski and his brother, Dawid, for the costs of their appeal and the return of any fines and penalties paid.

The appeals panel concluded the original injunction banning protests in the name of public health “was not sufficiently clear and unambiguous.”

‘It’s not about ridiculing anybody. It’s about creating awareness. And we need to be united, not divided, which is what the media has done,’ Jamie Sale said.

EDMONTON, Alberta (LifeSiteNews) – Canadian gold medalist Jamie Salé opened up about her “awakening” to join the fight against the COVID mandate and lockdown agenda, saying she is now “all in” to help expose the “censorship” taking place in Canada despite being ostracized by many former colleagues.

In a recent Rebel News interview, Salé, who won gold in pairs figure skating at the 2002 Salt Lake City Winter Olympics, said it was not until early 2022 when she finally decided it was “go time.”

“So it wasn’t until this past January of 2022 where I literally was sitting in my house and I said, it’s go time because I was quiet. I haven’t said a thing through COVID. I mean, if anything, I was still sleeping and I was bought into, you know, you need to wear a mask, do your part. And I was that person,” said Salé.

“And I was looking at people not wearing masks, going, you’re part of the problem, not the solution. I was following what the media was saying, brainwashing us to believe, and then I woke up to it all.”

Salé, who lives in Edmonton, said that as soon as everyone from her past “inner circle” found out about her “awakening” they were “literally mortified.”

“They said, you were ruining your reputation, do you realize what you’re doing,” said Salé.

“And I said, Well, you know what, if ruining my reputation for helping to help society see what’s really going on here, if that’s going to make me lose fans, then so be it. Because one day they’re going to see that this is really what’s happening and they’re going to need us.”