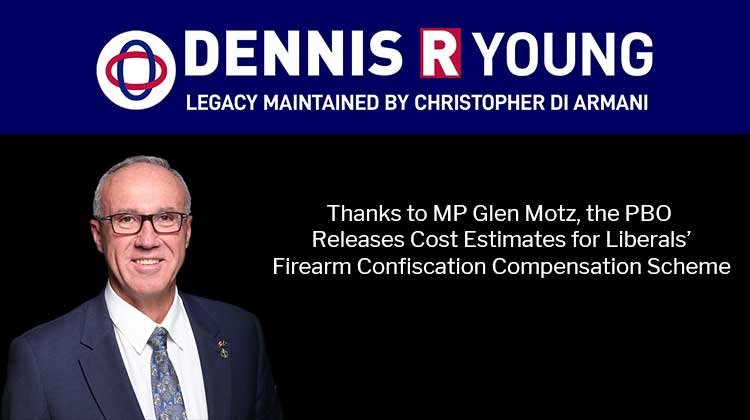 In response to a request by Member of Parliament Glen Motz (Medicine Hat—Cardston—Warner), the Parliamentary Budget Officer estimated the costs of the Liberal government’s Firearm Confiscation Compensation Scheme for the firearms they banned on May 1, 2020, by Order in Council. Note the estimate does NOT include administrative costs.

“Depending on the number of affected firearms in Canada, the take-up rate, and the pricing structure used, the estimated total compensation under the buy-back program could amount to $756 million, in addition to administration costs.”

Imagine the benefits to public safety if our government put those kinds of resources behind tracking those with Firearm Prohibition Orders against them, like the two violent young criminals who shot up a children’s birthday party in Toronto last week?

Instead this Liberal government will pay RCMP-vetted, federally-licensed firearm owners to give up their legally acquired property.

There is no explanation of how this will keep illegal guns out of the hands of criminals, of course, because none of these measures are aimed at the criminal element of our society.

There will be a much lower cost than predicted because if we all resist, there will be few firearms surrendered to buy back. Bagpipe face Blair and turdo collectively have the IQ of a leaky radiator.

It is very disturbing to me that this whole thing is nothing more than a terribly designed electioneering scheme. It highlights the true lack of morality for how harmful this government is for all Canadians.

Many of the firearms under the OIC ban were previously un-restricted, and have always been so. The government has NO IDEA of just how many firearms are covered by this ban, or who has them. The costs, if fully implemented will surely surpass the $1B mark, and by some margin. Couple this with the Trudeau Liberal’s propensity to bungle projects, and it will surely spiral out of control. Expect massive non-compliance, and the even larger problem is that this is nothing more than safety theatre. It is a useless, expensive unjust, unconstitutional partisan attack on a law abiding minority for political gain at… Read more »

See them in court.